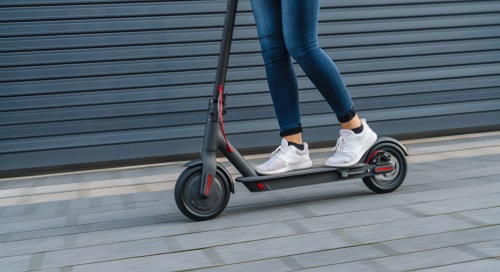 Home / News and Insight / Legal News / Had an accident involving a rental e-scooter? Here’s what to do next

Had an accident involving a rental e-scooter? Here’s what to do next

Had an accident involving a rental e-scooter? Here’s what to do next

As anyone who lives in Bristol and Bath will know, renting an e-scooter and zipping round the city is an increasingly popular way to get around.

Trials approved by the Department of Transport began last year as part of a drive to promote a mode of transport that reduces congestion and doesn't contribute to air pollution.

The scheme has now been rolled out to more than 50 towns and cities across the UK with 7,600 scooters currently in use and with permission granted to allow up to 34,425 to be made available.

However, there are now growing fears of a rise in accidents and personal injury claims connected to e-scooter rentals - especially as the government plans to extend the trials until 31 March 2022.

At the same time, a cross-party group of MPs has recommended that commercial rental e-scooters - along with privately owned scooters, which are currently illegal - should be fully legalised for use on public roads.

According to a TV investigation, which used a freedom of information request to gather information from local councils, there have been more than 800 incidents including 25 collisions since the e-scooter trials began last July.

This includes 210 injuries and 1,100 complaints as well as evidence of drunk and dangerous driving and anti-social behaviour. Many believe these figures merely represent the tip of the iceberg.

There has also been an increase in personal injury claims as a result of reckless e-scooter use. A pedestrian in Kent suffered a fractured leg, fractured arm and shattered elbow as a result of being hit by an e-scooter and a pensioner died after hurting himself trying to move a discarded e-scooter from the pavement.

What is the law on rental e-scooter use?

It is currently legal to rent an e-scooter as long as you are over 18 and hold a full or provisional driving licence.

Rental e-scooters are limited to 15.5 miles per hour. You are not allowed to ride them on pavements or on roads with a speed limit of above 30mph but you are allowed to use cycle lanes.

You don't have to wear a helmet, although it's recommended, and you must be covered by motor vehicle insurance, which is provided by law by the rental operator.

If you break the rules set by the e-scooter rental company, you could be fined £300 and have six points added to your driving licence.

What if I am involved in an accident involving an e-scooter?

In the same way as if you were involved in a car or cycling accident, you should report the accident to the police and take details of the other party and any witnesses.

If you are using an e-scooter and are injured because of another person or driver's negligence, you may be able to claim compensation.

Using a rental e-scooter means you will have the benefit of the provider's insurance policy to deal with any claim as long as you have followed the terms of the policy.

If it's found that you have been negligent in your duty of care to other road users, you could still end up in court being pursued for compensation.

Should I get specialist legal advice after an e-scooter accident?

If you have been involved in an e-scooter accident, please contact Wards Solicitors' Accident and Injury team, ranked in the 2021 edition of the independent Legal 500 guide.

She has specialised in Accident and Injury law since qualifying in 1992 and has been a member of the Law Society's Personal Injury Panel since 2008.

Contact any member of our Accident and Injury team or call Helen Boyd on 01275 850470, email: Helen.Boyd@wards.uk.com