New, harsher penalties for speeding are now in force as the government continues its crackdown on dangerous driving.

From April 24, anyone caught driving significantly above the speed limit will be subject to a much higher fine than previously.

Under the new rules, when dealing with the worst cases, magistrates will be able to calculate fines from a starting point of 150 per cent of the driver's weekly income - up to a maximum of £2,500 for a serious motorway offence - rather than the existing level of 100 per cent of their weekly income.

In addition, drivers will still get points on their licence, or even disqualification, depending on how fast they were going.

Reflecting the potential harm speeding can do

The Sentencing Council says the changes are to reflect a "clear increase in penalty as the seriousness of offending increases" and follows criticism of previous guidelines for not sufficiently reflecting how much harm and damage speeding can cause.

As the table below shows, fines are now determined in categories - Band A fine is 50 per cent of someone's weekly income, Band B is 100 per cent and Band C is 150 per cent.

It is thought that higher fines will now be applied more often and magistrates will have the flexibility to adjust the punishment depending on 'aggravating factors' including previous convictions and weather conditions. 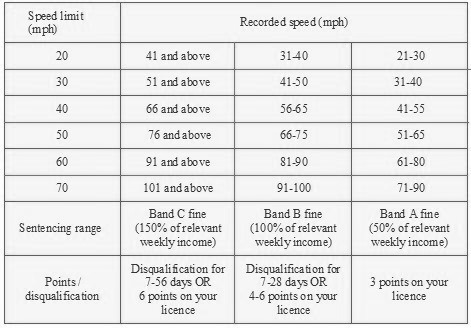 And don't forget, that from the beginning of March, the penalty for using a mobile phone behind the wheel has doubled - and you don't have to be moving to commit the offence. Culprits now face six penalty points on their driving licence and a fixed penalty fine of £200.